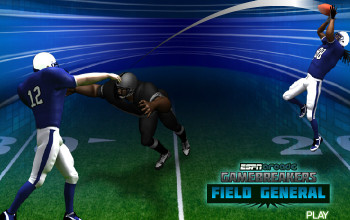 Return Man 9 is a simple yet fun online sports game. This is a football game in which you play the receiver and you catch the ball and you have to maneuver through the players on the other team to gain a touchdown. This game overall is very fun, and it’s again, very simple to understand. I could play this game for hours. With 15 different stages to unlock, it contains fun for hours.

The instructions are very easy to understand. You first begin at a screen where you have three people there to defend you and you are placed in the middle of the receiver. A small circle appears on screen soon after and it begins to fill in indicating the time remaining until you have to catch the ball or you will have to recover it from the ground. If you reach the circle in time, you will catch the ball and the game begins. Moving using only the arrow keys makes it easy to move around. Once you catch the ball, start running forward to reach the touchdown line. While you are trying to get there, your defenders will try to protect you and most of the time they will be successful, but sometimes, players may get pass them and you will have to use your skills to get past them and get the touchdown. If you get tackled before you reach the touchdown, then you will have to start over and you will lose one of your possessions. If you don’t successfully catch the ball at the beginning, then the ball will tumble around and you will have to go retrieve it, which will take more time, and lower your chances of getting a touchdown. With an ever game, each stage will be harder, and making a touchdown will get way more difficult each time. If you never make a touchdown, you will lose all your possessions and will lose the game. Now there two options at this point, watch an ad and gain another possession, or start over from the beginning. So if you got really far and don’t want to lose your progress, it’s wise to watch that ad and bear through it.

Overall, this game is very fun, and it has a unique style that makes me want to spend a lot of time playing this game. So go ahead and try it, you won’t regret it.

P.S. Keep in mind the official name of the game is Return Man 3: The Season, but all gamers around the world know it more as Return Man 9 (probably because it is the latest release).